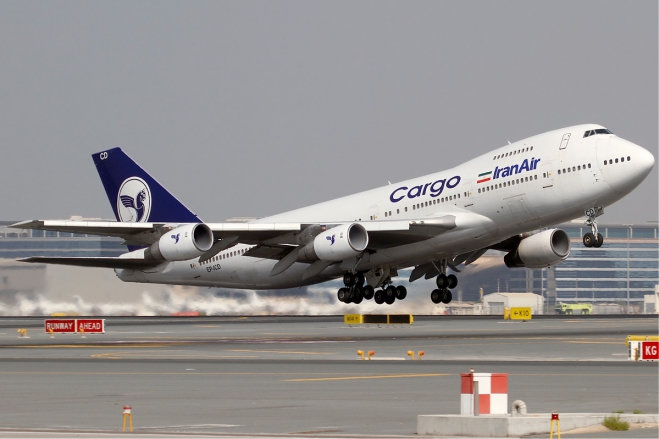 Major news agencies have been flying high on talk of trade deals with aircraft manufacturers around the world helping Tehran replacing their current 140 strong fleet, which is now reaching obsolescence.  Whilst numbers reported vary, there could be as many as new 400 planes hitting Iran’s runways soon.  The anticipation and speculation took off following a press conference held on Sunday in Tehran with top Iranian officials declaring they were open to discussions on upgrading their air freight services.

At the press conference, Iran’s Transport Minister announced an agreement with French Airbus, albeit the French company are still wary of infringing remaining constraints on trade.  President Rouhani  visits France this week, so we are looking forward to seeing the first obvious routes into European markets, which could have trickle down benefits for jobs in Iran.

He announced that the CAO seeks to acquire an equal number of Airbus and Boeing planes, costing around $20 billion (18.2 billion euros), to be funded partially with previously frozen assets which are now available to Tehran once more. Since 1995 a trade embargo prevented Western manufacturers from selling equipment and spare parts to Iranian companies.

Restrictions were shifted two years ago in January 2014, when the sale of spare parts became permissible, with sales of planes remaining banned.  Now, buying or leasing planes, the transfer of engines or other spare parts offers opportunities for Iranian manufacturers to reverse engineer and innovate.

Transport Minister Abbas Akhoundi said last May that Iranian airlines had obtained 15 used planes in order to renovate planes here. To keep up with growing demand for passenger transport, Iran will need 400 to 500 passenger planes in the next ten years according to some Iranian officials; this is before meeting air freight cargo capacity.

The BBC reported the US manufacturer Boeing as a preferred aircraft business partner, requiring specific permission directly from President Obama. Iran's deputy transport minister Asghar Fakhrieh Kashan told Reuters that Iran was considering buying 100 aircraft from them.  Boeing says that there will still be "many steps" before their final decision on a deal, but is not ruling out prospects for serving a growing and ready market for overseas travel and air cargo carriers in Iran. In light of sanctions officially easing the previous week, Boeing received special dispensation from President Obama to begin discussions last week.

Airbus could sell 114 aircraft to Iran when President Hassan Rouhani visits Paris today, according to Iranian media.    Airbus is ready to negotiate, with a view to compliance with international laws; at the time of writing, there has been no further comment from them.  Akhoundi seems optimistic, however, that the first batch of 8 new Airbus jets could arrive by late March. A senior official told delegates that Iran was closing on a deal for 127 jets from the French company, with the deputy transport minister referring to eight A-380 superjumbo planes being delivered from 2019.

Watch this space for updates and commentary on the prospects for international business opportunities that improved air transportation will offer.  The White Rose Group hopes to have a role in facilitating expanded trade, as an air freight forwarder in Iran, with twenty years logistics experience.

Our capacity to benefit from European trade has been hampered by our commercial airliners average age of 27 years’.  This has meant that European regulators have banned all but a dozen of Iran Air's planes entering European airspace.   Meeting international safety standards is the first step to reinstating international air freight services.  Iran Air's currently owns 43 jets, a low-cost carrier and operates air cargo carriers.

Transport Minister Akhoundi has said that only 150 planes are currently operational out of 250.  Acquisition of 400 medium-to-long range planes and 100 short-range jets is hoped for. Of course exact details of deals are still a source of speculation, so reports of numbers of . vary.

Reuters refers to a need for “more than 160 European planes - including 8 superjumbos...”

Tehran's strategic transport and economic development objectives in the Gulf region mean that business leaders in manufacturing can look to the skies for inspiration to invest once more. Abbas Akhoondi is urging overseas investors to talk to Tehran about their business expansion ideas.  We encourage Iranian businesses to talk to companies with expertise as international project management professionals[D1] .

300 airlines, suppliers, lessors and bankers attended an aviation conference in Tehran on Sunday, where phone-calls and conversations took off immediately following the press announcements. The end of sanctions against Iran already mean that legitimate trading with Iran is on the runway and ready for lift off!

The Transport Minister wants to see an end to middlemen who have profited on the black market by finding ways around sanctions to buy parts and even aircraft. He warned investors against "lying" dealers. The White Rose Group too recommend working with established professionals to help with doing business with Iran.

There will be no end of benefits for Iranian companies with an interest in the aviation sector. Investors attending the CAPA Iran Aviation Summit illustrated the enthusiasm for supplying Iran, given the air feight industry faces challenges in an somewhat volatile global economy right now.

Iran is set to see domestic and foreign carriers fighting to gain prominence in serving Iranian companies and civilian markets. Tourism and investment in related industries is likely to have a real fuel injection following Sunday’s press conference.

Akhoondi told Reuters that Iranian companies need not fear competition from foreign air freight carriers on the basis of the country’s geographical location.  Priority will be afforded to Iran Air, of course, but Tehran is supportive of private carrier companies.

Numbers of potential deals got off to a good start on the first day of the conference. Asghar Fakhrieh Kashan, Deputy Transport Minister hopes to secure a deal for 127 aircraft, mainly new. Aside from Airbus speculations, 40 European ATR turboprops were mooted as under negotiation.

Another Iranian official referred to around 45 short-haul A320s and 40 A330 wide-body jets as possible additions to Iran’s air freight capacity.  Karshan was interested in regional aircraft too, including Mitsubishi's MRJ and Canada's Bombardier C Series.

All told, planes valued at $20 billion include a mixture of new and end-of-run models. Given new carriers will take time, four out-of-production long-haul A340s will be bought on the second-hand market, ready for immediate service.