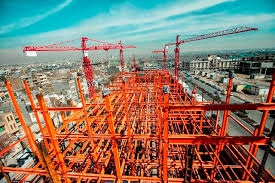 With the steady re-emergence of Iran’s economy from semi-dormancy, despite peoples’ scepticism that progress is happening too slowly, market research firm, Report Linker, has just written an analysis of the near to mid term future of Iran’s construction industry which signals that change is coming.  The construction industry is like a barometer of the general economy; when buildings are going up, chances are, so are household incomes generally too, as jobs increase.

Report Linker say the economy “…is set to perform well over the forecast period (2016–2020)”.  , The investments in infrastructure we have been talking about for the past year, together with energy projects and residential developments around the cities and at the new transportation hubs are signs of renewed growth. The investments continually being negotiated from both abroad and within the country demonstrate a burgeoning confidence in Iran’s future which will inevitably spill into communities too.

In particular, the construction industry is expected to grow at “…a compound annual growth rate (CAGR) of 6.34% between now and the turn of the decade, several times faster than in recent years; the researchers say it was 1.64% between 2011–2015.

While some fear that some obstacles still remain, such as low oil prices and high labor costs, the outlook remains pretty solid.

Timetric’s report on trends and opportunities for construction in Iran shares further insight, such as analysis on the specific project types and activities, such as: infrastructure, energy and utilities, commercial, industrial, institutional and residential developments. It also looks into tools, equipment and service cost break-downs and what the risks and opportunities are.  Anyone looking to build their knowledge and networks with the Iranian companies who are leading operators would benefit from the detailed information contained in their report and can take comfort from the forecasts that now is the time for investment.

As Iran seeks to build its reputation abroad and ensure that developments serve the long-term interests of Tehran’s strategists, companies seeking to invest in Iran’s construction industry need to keep an eye on emerging regulation, cost management, funding sources, pricing in the supply chain and amongst the competition.  Getting the right advice and linking into the business networks will be crucial to successful investment.

The demand for housing is out-stripping supply, which means there is plenty of potential for would-be investors.  The Ministry of Housing and Urban Development have stated that 1.5 million new homes are required every year, compared with the 700,000 currently being built. Trimetric conclude that 4 million new homes are needed to redress the imbalance between supply and demand. Iran has a growing urban population who will need to be housed. Housing developers are perfectly placed to maximise the opportunities ahead.

The White Rose Group reports extensively on the country’s infrastructure developments too, not only because freight forwarding for business is key to what we do, but also because we help Iranian companies and their foreign counter-parts to get involved in developments because of our extensive professional networks built up over time.

We understand the importance of modernised transportation infrastructure to support the growth happening already and what lies in our collective road ahead. Simpler connectivity and time saving is crucial to our competitiveness and we are very happy to see this as a priority in government too.

In particular, we see the role of air and rail freight really helping businesses get ahead with their import and export business opportunities.  Regional rail networks, in particular those around Bandar Abbas and links to borders with our neighbours in Central Asia are destined to show great results in the coming years.  This year the government announced plans for the country’s rail transportation networks moving towards comprehensive coverage by 2025. We expect the rail freight network to increase from 15,000km this year to 25,000km by 2025.

Foreign investment will be vital to achieve our freight transportation objectives as a country. Accordingly, We welcomed the memorandum of understanding signed early this year between the Islamic Republic of Iran Railways (RAI) and Siemens, a German company, who will be helping development of Iran’s rail infrastructure.

Amongst all of the industrial development, self-reliance alongside job creation will be crucial for industries looking for new business opportunities.  For instance, renewable energy to reduce our dependence on fossil fuels to power regeneration and fuel our economy will see more interest from trade partners keen to share their technological developments and expertise.  As we harness solar and wind, we will develop energy security and meet the demand from an increasingly aspirational people whose consumption has been stymied over the past decade . Tehran’s  five-year Economic Development Plan (2016–2021) includes aims to increase our renewable energy capacity to 5GW in the next two years alone. Once the transition begins, our engineers own expertise mean that the trend to renewables will be set to continue.

All these national requirements offer opportunities for the expansion of our construction industries and joint projects with business partners who have the know-how.  If you are looking to build your networks and supply chains, the White Rose Group can help.