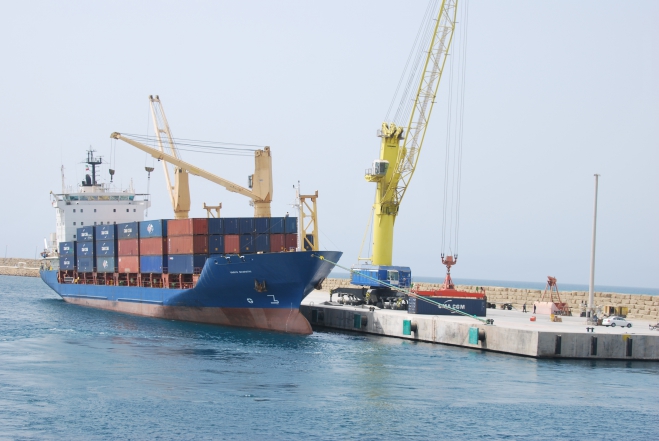 In Spring this year we reported on the trilateral transit Chabahar Treaty, signed in the presence of Iranian President Hassan Rouhani, Indian Prime Minister Narendra Modi, and Afghan President Ashraf Ghani in May, this month finally came the Iranian Cabinet’s ratification.  This agreement allows the three countries to develop new trade routes to connect among themselves via the port of Chabahar transit hub.

Chabahar port allows India to by-pass restrictions imposed by Pakistan and  export  to Afghanistan and central Asia more easily.  Afghanistan connects to India via sea freight.  Iran, of course benefits from increased trade from both sides.

Nevertheless, there have been some choppy seas to get to this point.  India is yet to begin work at Chabahar. Meantime, China courses ahead at Gwadar port 72km away.

Modi’s delegation described the agreement as a “historic” deal offering India much-needed trade access to Central Asia.  Other than circumventing Pakistan, Chabahar Port development was considered vital to slip free from China's ‘encirclement’.  Nevertheless construction has not commenced as expected.

According to Sameer Patil, an analyst at a research organization in Mumbai: "What you're seeing is the problem with many of the Indian commitments abroad," and "The Indian bureaucracy…." he said.

Chabahar’s fate may seem shrouded in mists of the upper echelons of India’s power houses, but "With China and Pakistan developing Gwadar just a few kilometers away, India cannot afford either delay or inattention to this vital port," says Shashi Tharoor, a prominent politician from India's main opposition party Congress.

Beijing steams ahead to create its strategic ‘string of pearls’ strategy. In Pakistan China is involved in several infrastructure projects and port developments in Sri Lanka and Bangladesh. The race to put ship to shore is on between the two super-powers and Iran’s shorelines are key.

Rushing to the oil-and-trade precipice

In a recent report by Major General S.G. Vombatkere, VSM, who has over 500 published papers in national and international journals and seminars, Modi may be also slowing the pace of Gwadar’s development, by injecting some uncertainty into regional geo-politics, by making reference to Balochistan, where the port of Gwadar sits. This will not be well-received by Chinese investors in the Pakistani port.

India’s raising of conflict issues around Balochistan is a strategic message aimed at slowing Chinas push into the Arabian Sea and this could signal a new impetus to the stalled Chabahar project.  Increased Indian influence in this region will, according to Vombatkere’s analysis open trade routes for India from Chabahar to the Caspian Sea ports, into Russia and Europe and more easily access Central Asian oil and gas via the International North-South Transport Corridor. [1] India’s “Balochistan initiative” not only furthers its oil-and-trade security concerns, it injects some hope into observers of Chabahar’s slowed progress.

Efforts at increasing oil and trade security by Modi are founded on the Indian objectives of “…economic growth centred on industrialisation and consumerism…”. Whilst the IMF has expressed some doubts about this economic approach, such ‘neo-liberal’ development tools still matter. [2]  Yes, there are numerous variables at play around Chabahar getting under full steam, but need is pressing amongst all three signatories to that original Treaty.  The partnership could still "alter the course of history".

Chabahar Now and Then

Critics of Chabahar refer to the fact that it is now roughly 13 years since India first agreed to develop the port of Chabahar.  However, the reality of life is that geo-politics can change course overnight.  At that time of optimism, nobody foresaw sanctions being imposed on Iran by the U.S. and Europe and how this could pull the plug on investment flowing into the project.

Recent reports on Chabahar cite a single ship floating at the main jetty and that most of the cargo containers on site still mainly bare the logo of the state-owned Islamic Republic of Iran Shipping Lines.

The injection of $500 million into the project must come, however ($85 million for equipment and a loan of $150 million for the first phase, the rest to follow in tranches).   China, India’s strategic rival is sinking $45 billion into the China Pakistan Economic Corridor that takes in Gwadar.  India and Iran officials have haggled for two years over who pays $30 million of excise duties on port equipment imported into Iran, according to Iranian diplomat Hamid Mosadeghi, who heads the economic section at Iran’s New Delhi embassy.  This has to be resolved for the sake of development in both countries so badly needed and to send a signal to foreign investors signing deals with Iranian companies that Iran will be definitely be open for business.  Mosadeghi comments: "Both sides want to expedite this."

The pressure is building to push ahead.  "With China and Pakistan developing Gwadar just a few kilometers away, India cannot afford either delay or inattention to this vital port," said Shashi Tharoor, a lawmaker with India's opposition Congress Party and chairman of a parliamentary committee on foreign affairs.

India's ambassador to Iran, Saurabh Kumar recently interviewed says: "We are dependent substantially on urea, ammonia and fertilizers, and given Chabahar's geographic proximity, the transport costs are negligible."

Afghanistan could potentially exploit an estimated $1 trillion in mineral wealth.  The north-south railroad involved in the Chabahar Treaty would help the country’s trade.

Transport ministers from Iran, India and Afghanistan met at the end of September in New Delhi to assess progress on the plans for two terminals and five jetties, according to Ambassador Kumar.   Iran’s Transport Minister Abbas Akhoundi remains bullish: "We have not fallen behind in the Chabahar port development plans….This plan is being carried out at the appropriate speed."

Geopolitical Shared Interests
Apart from the interests of the three signatories, it has been suggested that Chabahar could also benefit China.  Trade ties established with Iran during sanctions could mean that they could gain from the Islamic Republic's $400 billion economy.

Chabahar’s development will enable Iran to handle large cargo shipping containers, reducing dependence on UAE port intermediaries.  It will also mitigate against vulnerability to potential trade disruption in the Strait of Hormuz, claims Abdolrahim Kordi, deputy head of economic affairs at the Chabahar Free Trade Zone.  Regional tensions could result in this shipping bottleneck at the mouth of the Gulf being blocked, meaning  Chabahar would be “the only point that can connect Iran to open seas,” he said. This is a worst case scenario no party can afford to suffer.