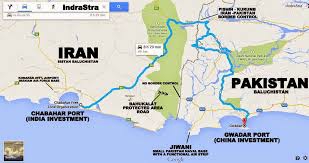 Mehr News Agency reported recently that Pakistan is keen to launch a Karachi to Chabahar sea passenger transport route between the two ports in the region. This could also have implications for the Part of Gwadar, Pakistan too, which lies a little closer to Iran’s Chabahar port, approximately 60km away.  Gwadar also potentially connects China to Iran and is viewed by some as a rival export route.

It seems that as the Chair of the Pakistan National Shipping Corporation (PNSC), Arif Elahi can be viewed credibly. His strong positivity while meeting with Iran’s Economic Attaché at the Islamic Republic of Iran’s Consulate General, in Karachi Hamid- Reza Nezaratizadeh came as both parties discussed bilateral cooperation in various sectors, with particular emphasis on maritime transport collaboration.

Elahi official noted that opening a sea passenger line between Pakistan’s port of Karachi and Chabahar Port will support travel for both potential partners, particularly Pakistani pilgrims who wish to visit Iran.  Pakistani pilgrims could affordably enjoy travel to holy shrines in the Iranian cities of Mashhad and Qom. Many also travel onto Iraq via Iran to visit the holy shrines there too.

The over-land distance can be too difficult for travellers, and numbers of direct flights between the two countries are still limited, or beyond the affordability of some pilgrims, so a passenger line between Karachi and Chabahar ports could be the perfect solution for passengers travelling either way.

Meantime, the $46-billion the China-Pakistan Economic Corridor project, (CPEC), is going ahead; this will build be a boon for Iran’s Chabahar as much as Gwadar, to the south on Pakistan’s coastline.

India and Afghanistan are also implementing a deal with Iran for another transport corridor, which will open a new route to Afghanistan via Iran’s port of Chabahar. Last year, we reported that the Indian Prime Minister, Narendra Modi signed 12 agreements with Tehran on transportation and trade infrastructure, including development of Chabahar port.

India is to spend $500 million on this import export business project, together with an additional $ 16 billion to be injected into Chabahar’s free trade zone. Chabahar is ideally located about 1,800 kilometres south of Tehran and is well served by rail freight routes and roads.

CPEC is a significant part of China’s ‘Belt and Road’ trade strategy, as well as key to Pakistan’s domestic development and regional integration plans.  When Gwadar port is fully operational, it will connect Central Asian Republics (CARs) that are currently landlocked with rest of the world.

Becoming another commercial hub, the volume of trade in the wider region is likely to increase.  High-volume cargo vessels will be able to optimise sea freight capacity. Increasing prosperity in Balochistan province could benefit the Baloch people which potentially will bring more stability in the area.

The Chinese newspaper, the Global Times has taken the stance that India’s support for Chabahar potentially limits Gwadar’s prospects. However, there are commentators who suggest that the region offers scope for both ports to succeed, given the demand amongst businesses and local people in the region.

Furthermore, while there are on-going issues of lawlessness in Afghanistan, the India-Iran-Afghanistan agreement linking Chabahar to Central Asia may yet slow down India’s hopes to win the so-called historical Great Game for control to connect South and Central Asia through Afghanistan. Time will tell where export and import opportunities in the region develop, but the wider geo-political forces at play will be significant, according to Sajjad Shaukat of Kashmir Watch.

While there seems to be some quibbling about relative distances between Chabahar and Gwadar to e.g. Kandahar, certainly purely in distance terms, there is little to choose between the two routes to the coast for Afghani cargo.  In terms of freight costs, for companies in Afghanistan seeking to export overseas, it is worth speaking to expert freight-forwarders and doing your research, as different sources may quote varying prices. The fact remains that a key to speed and efficiency of delivery depends upon political stability within the boundaries of each trade partner and between each other. International freight forwarders will be well aware of the relative risks and potential costs in terms of road and rail freight to reach the Arabian Sea in the region.

Afghanistan’s fruit and vegetable exporters will in particular need expert advice in terms of freight times, given that some foodstuffs are perishable.  Their business location will be key to choice of port.  Chahbahar can be ideal for some, but not all. Mehr news for instance, cites the case of exporting melon and grapes from Northern Provinces and some agricultural products from Logar, Laghman and Ningarhar. Furthermore, fruit and agricultural producers should seek to find out if there are any limits on what they can send to Iran, given any exclusivity arrangments Iran has with Indian competitors.

Whatever the potential for difficulties and tensions in relation to regional trade and competition between Chabahar, Gwadar and Karachi, the countries still have interests in common.  Not least the Turkmenistan-Afghanistan-Pakistan-India (TAPI) gas pipeline project.  This offers hope that cross-border co-operation is beneficial for each.  The race between Chabahar and Gwadar may pan out to be a myth yet, given the variety of interests different business owners within the region have.

There is no reason why the two ports cannot share in the obvious trade capacity Central Asian countries can offer. The balance of value of throughput will no doubt evolve as relations between the partners shift and change and as local peoples’ perceive their interests as linked to those across borders to their neighbours.

In terms of terrorist threats to trade in the region, foreign involvement including America’s CIA, Israel’s Mossad and the Russian-led coalition of Iran, Lebanon-based Hezbollah and Iraq, time will tell how war games play out on the ground. All commentary on this is speculation at best. Meantime, businesses in the region are concerned with the day to day delivery of goods with effective and speedy transportation and logistics. For companies feeling confused by the bigger picture and worried about the safety of their cargo, prices and fees,   the best advice we can offer is to work with partners who can offer custom brokerage and have a wide range of networks to support import and export opportunities available.